This is part two of our Kitali ASA conference… 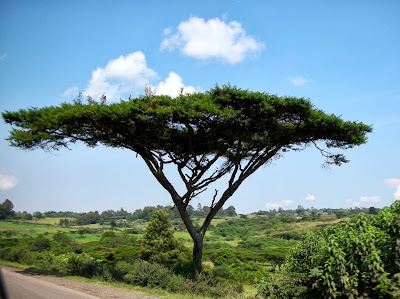 We hope no one is getting tired of us talking about the ASA (African Shepherds Alliance) conferences. We have had two now in the last eight days. It’s just that God is blessing them so much and they’re really making some head way in changing religious leaders mindsets here in Kenya about what it means to be a leader in God’s church. In fact it’s changing their minds even as to what makes up a biblically sound spiritual church and what that church should be doing. Our readers should understand that we are purposely not going after the big affluent churches with wealthy pastors even though we have been asked to speak at several of the well-to-do churches. We primarily seek out pastors and leaders of churches in impoverished areas. This might cause you to ask … Why the distinction? The answer is simple … It’s where the Holy Spirit told us to look for people who would have plenty of faith and desire God’s government in their lives.

Listen, my beloved brethren: Has God not chosen the poor of this world to be rich in faith and heirs of the kingdom which He promised to those who love Him? (James 2:5)
What we feel God wants to do here in Kenya will take men and women of strong and courageous faith. And what’s becoming very exciting to us is … we’re beginning to find them!

Our Nairobi trip commenced with the sending of our dear brother Vincent to Nairobi one day early before we arrived to make sure everything was in place and well organized. He did and it was. We have had plenty of disappointing experiences when we failed to check things out before we arrived.

So at a dark four thirty a.m. Friday morning James, Beatrice, Cynthia and I piled into our little Toyota Camry and headed to Nairobiin the pitch black and very foggy highway to Nairobi.

Now I can tell you straight out that driving in Kenya in the night is one of my least favorite things in the world and it’s also one of my biggest fears as well. Our car’s lights are very dim (as well as my old eyes), the windshield is scratched and for some unknown and suicidal reason every Kenyan walking down Kenyan roads wears dark clothes.

When a car coming from the opposite direction streaks past you, their headlights will completely blind you. Add to that the pea soup fog that night, drunks stumbling home (some in the middle of the road), huge trucks, buses, matatoo’s whizzing by and being driven by sleepy over worked drivers and it is nothing short of a prolonged nightmare. 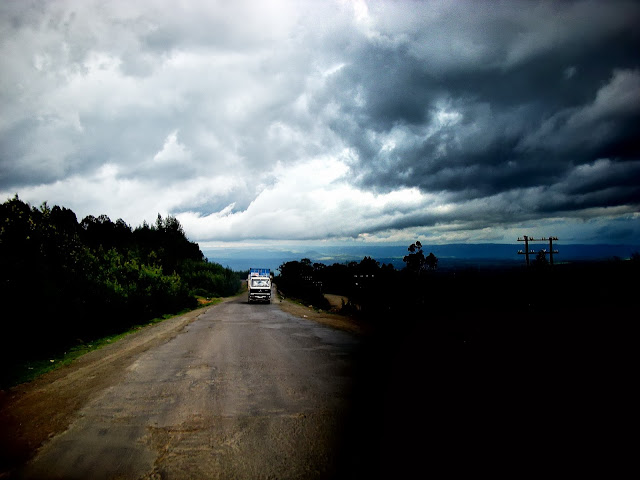 That’s not even taking into account the corrupt police check points who want a small bribe or the occasional robbers who want everything you have. Twice that night we were forced completely off the highway by giant trucks passing other giant trucks. One almost got us.

These trucks are always tipping over from being overloaded or being repaired in the middle of the road. Like these unfortunate ones I took pictures of on previous trips. As you might imagine at night these present a dangerous problem. 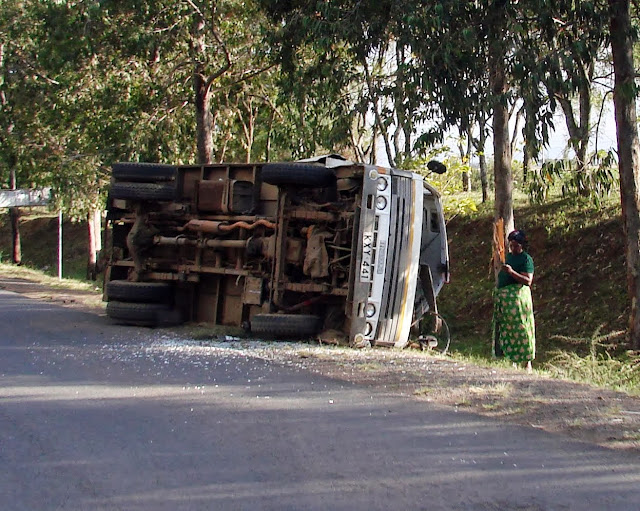 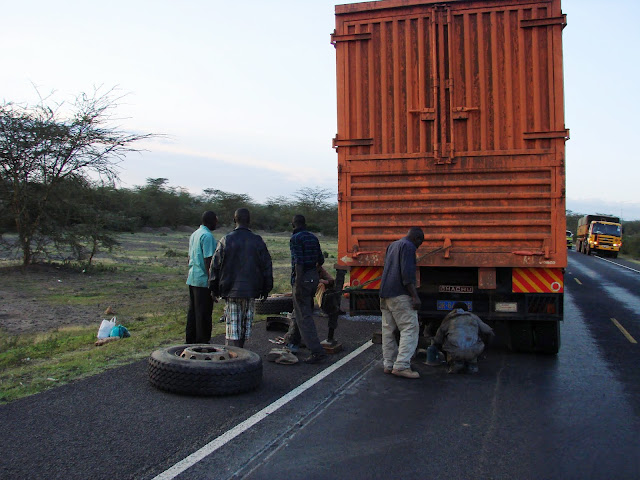 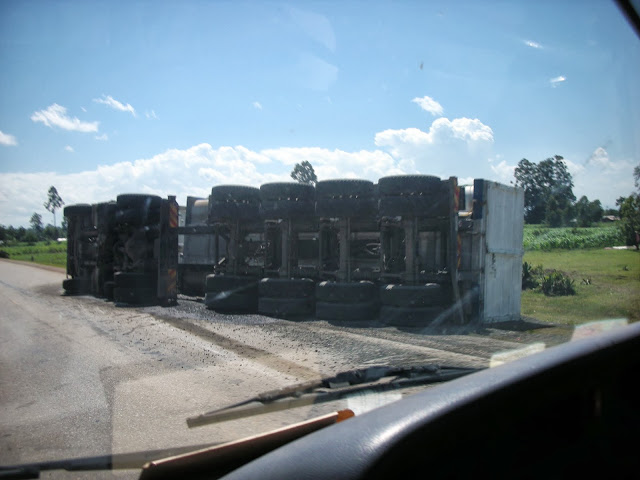 We prayed that daylight would come soon and were very grateful when it finally did. Hallelujah!  I once was blind, but now I see…. 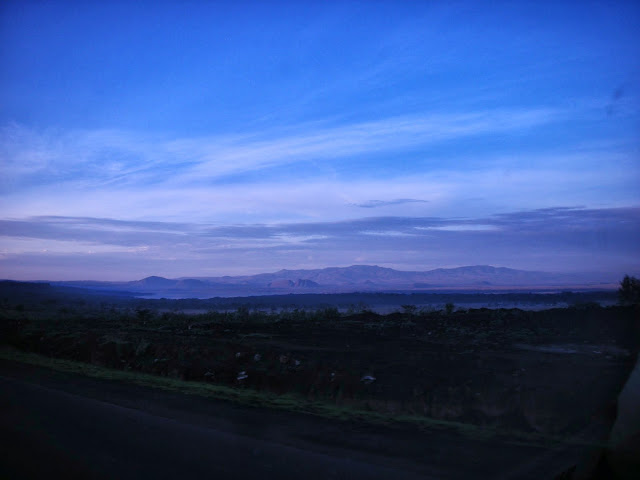 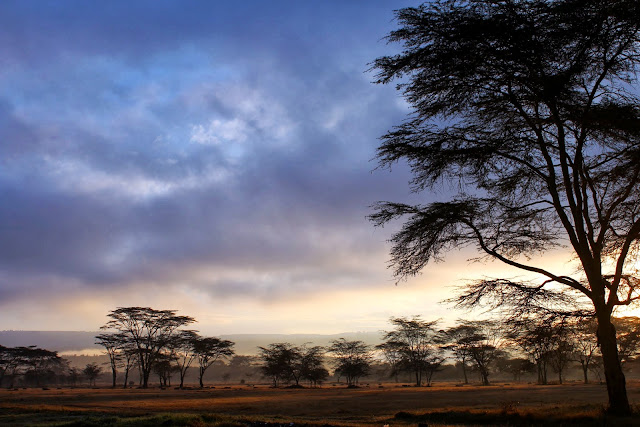 When we finally arrived in Nairobi we entered into second biggest fear I have in Kenya and that’s driving through its capital, Nairobi.

Now I know that there are dangers involved in ministering to remote villages out in the bush but working in the slums of major Kenyan cities has its own particular dangers as well. Especially in Nairobi. Gangs are a real problem there. I feel infinitely safer in the bush with the wild things than the streets and slums of a big city. Kibera slums are one of the biggest and most dangerous slums in the world and it is only one of many other smaller slums throughout the city. The picture below is a very small part of the Kibera slums. 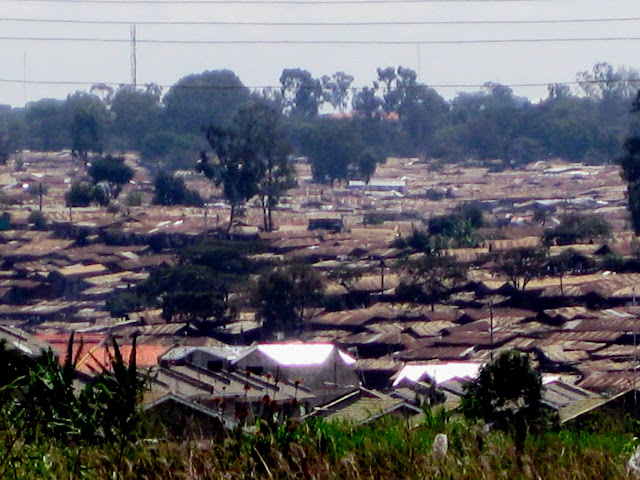 People can get very desperate when they have to eat out of the dump and understandably so. This particular two hundred acre dump is within a couple of miles of where we taught and well within the city’s limits. There were more humans dining on the garbage than were pigs. These are the people who we minister to. 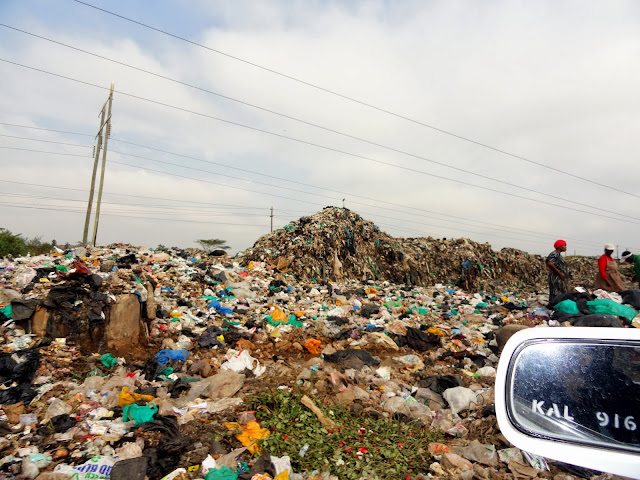 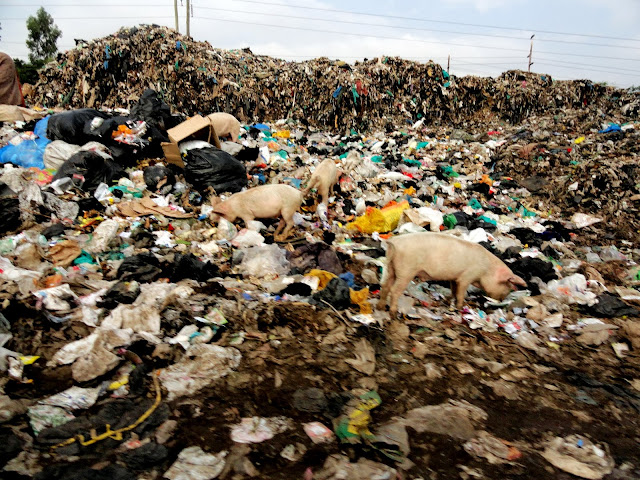 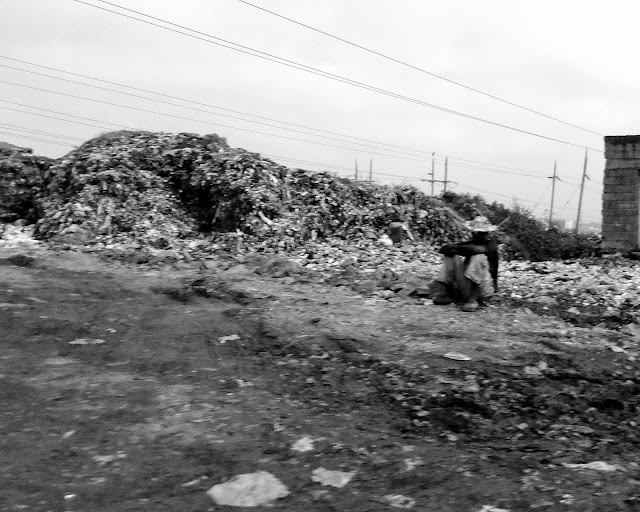 After over an agonizing hour of negotiating the… no rules what-so-ever, whoever is the craziest wins… roads of Nairobi, we arrived at our destination. 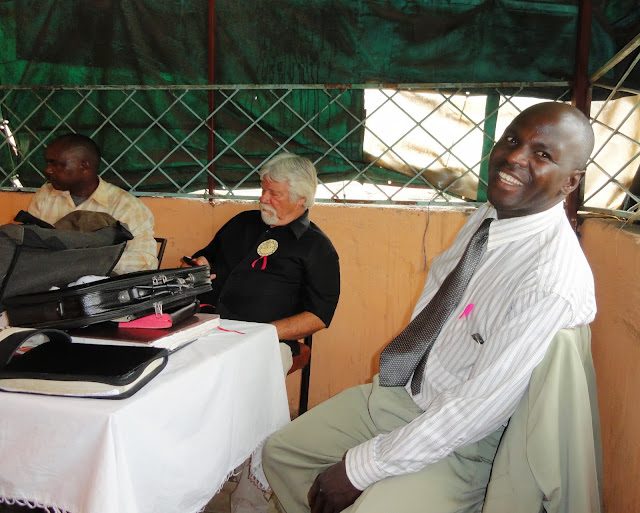 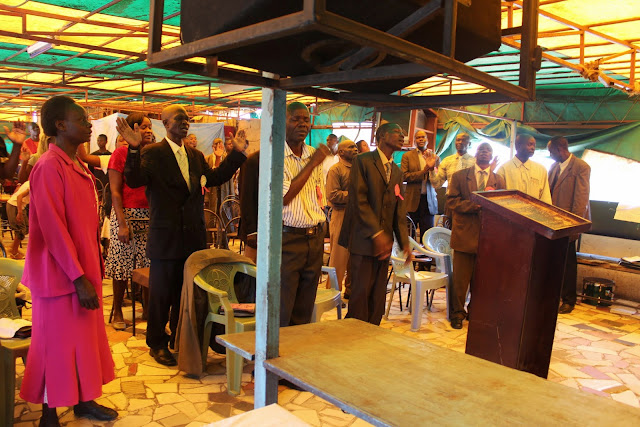 We were met by our good brother and host named Barassa. Barassa lives in Nairobi and works in Nakuru. He also oversees around ten churches. We were quickly taken to a third story roof covered with tarps filled with some lovely saints singing for all they were worth.

After a few introductions we began to teach. The Lord immediately took hold of the room and the men and women who had expectantly come to hear the word of the Lord… began receiving His heart. We experienced the reality of the passage in first John verses one through four. Our team shared what God had been doing with us and it brought them into fellowship with us… and God. Their joy (and ours) was becoming full. 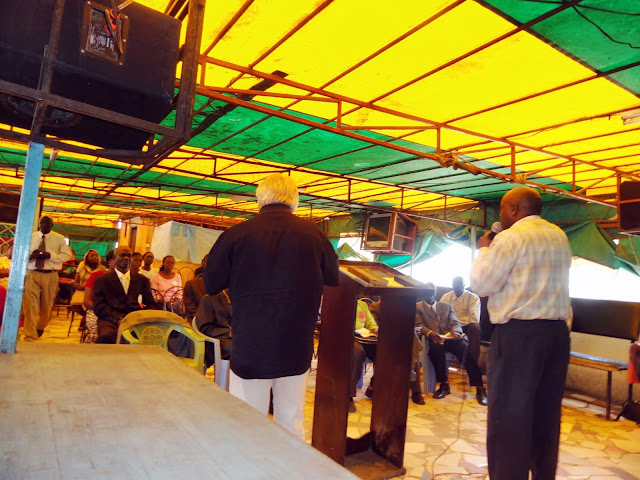 After the first teaching session ended… men from three different countries came and asked us if we would please come to their churches and teach. That is something by God’s grace we want to do. 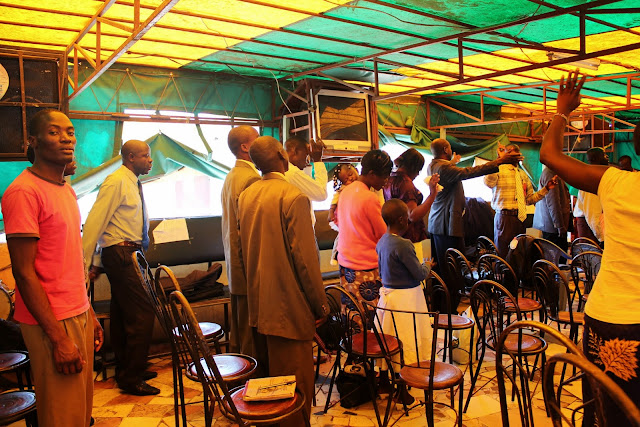 That afternoon while James, Vincent and I worked with the church leaders, our wives took the women to another room and waded into the controversial and disturbing issues of the terrible abuse of Kenyan women by their husbands.
Beatrice and Cynthia uncompromisingly addressed the evils spawned by the socially acceptable practice of multiple wives or what we call ‘cultural adultery’ practiced by some Christian leaders. The women were so grateful to learn that their heavenly Father does not condone such practices they almost cheered. 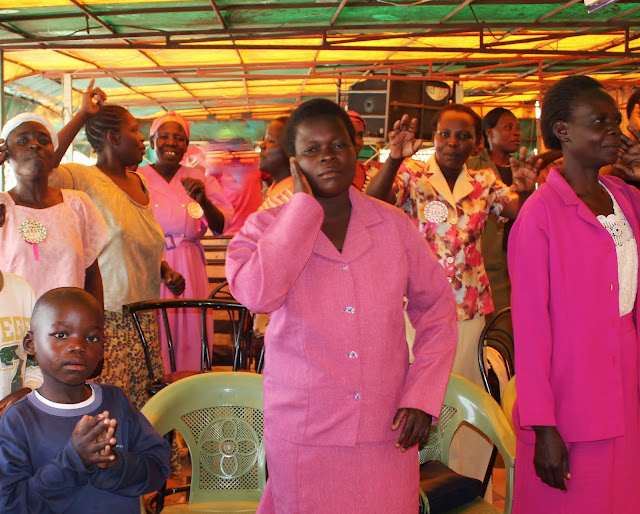 That night we went to an inexpensive hotel about two miles away. Cynthia brought her earplugs and fortunately missed the live ‘music?’ from the bar next door. Unfortunately I didn’t. They finally stopped screaming at four thirty in the morning. 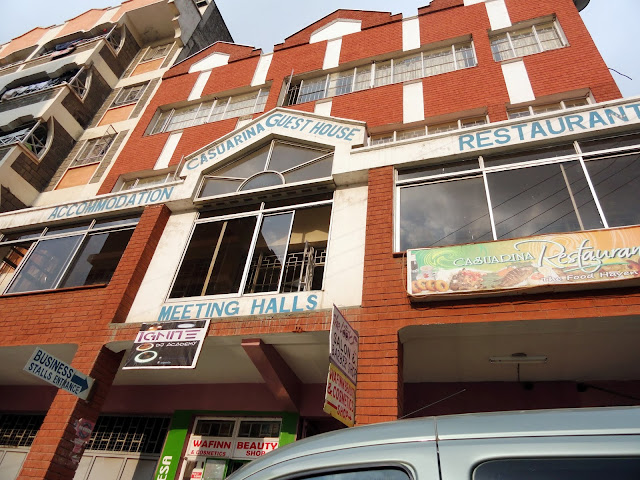 The next morning we headed back to the conference and the dear people of God who had come to learn more about His Kingdom.

We found out upon arriving that the landlord of the roof top meeting place just happened to see Wazungu (white people) on his premises yesterday. Barassa had rented the rooftop meeting hall for the three days of the conference at a reasonable price. But… that was before the landlord spotted the walking white ATM’s on his premises. So he did what most enterprising Kenyan landlords would do… he doubled the price of the rent for the next two days.

Not having the inflated cost of rent we were moved across the street to a smaller, darker and considerably more warmer room made of cardboard and tin.

We became worried that some people might stay away with the lesser accommodations. So we prayed and our Father heard us. 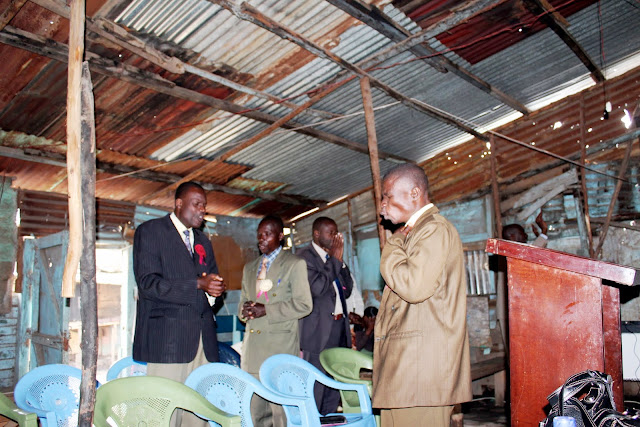 Not only did they not stay away… they brought more people! So we commenced again teaching the wonderful truths about the love of God and the power He wants to bring His gathered people. Again the Lord grabbed the hearts of all who were present. After our last teaching many of the men and women asked how they could be a part of the African Shepherds Alliance and if we could send someone to teach at their churches. They told us they would never be the same. 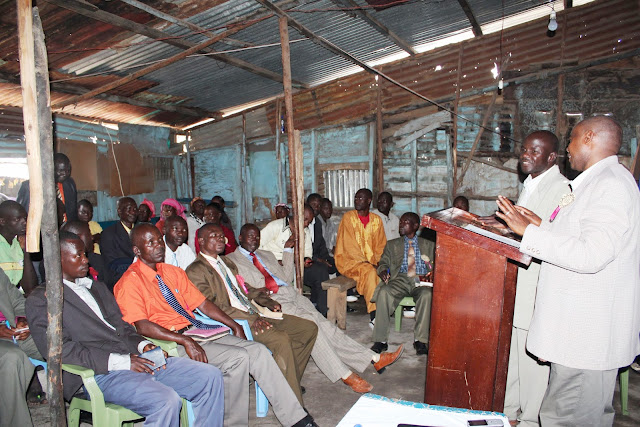 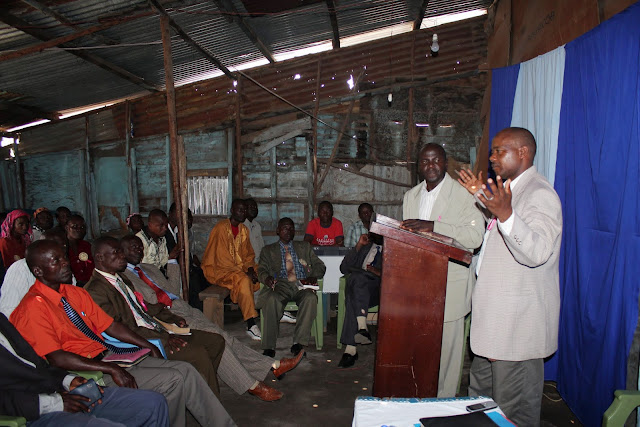 Because it was getting late and we didn’t want to be caught driving for a second night, we bid our new friends farewell and started our four and a half hour drive back to our home in Nakuru. At that point we were pretty tired out.

When we got within an hour of home we stopped at a gas station/fast food place to freshen up and get a snack. The eatery turned out to be almost a duplicate of Kentucky Fried Chicken… so we promptly pigged out. Wow it was so good! As we took our food out on the open air ‘veranda’ in the back we saw a most beautiful sight. It was a golden lake one thousand feet below us. Again, just like our trip to Kitali… we felt the pleasure of our Father. 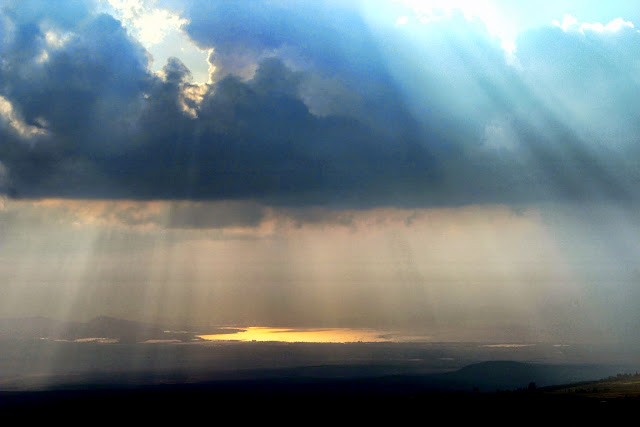 The challanges we face in the ministry in Kenya are great… but so are the rewards. Please pray about helping us continue this needed and important ministry. Thanks for your prayers and your financial support. May the Lord keep you safe till we meet again.

Your missionaries in Kenya … David, Cynthia and our Nakuru team.